Home » Riding Horsemen: The most dangerous festival in Japan

Organized for more than 12 centuries, Onbashira – the most dangerous festival in Japan – takes place every six years, in the years of the Monkey and the Tiger, according to the Chinese zodiac.

The festival was last organized in 2016 , and the next edition will be held in 2022 . This archaic tradition involves the replacement of sacred posts from four altars in Suwa-Taisha, the Grand Shrine of Suwa Province. 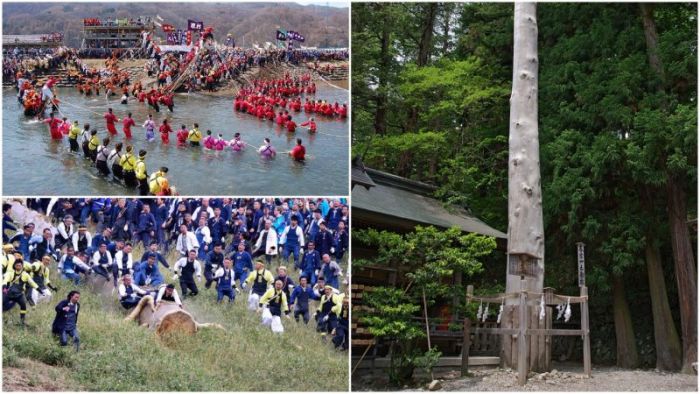 The place is northwest of Tokyo, in the Suwa Lake area of ​​the Japanese prefecture Nagano.During the procession various activities take place and the participants are in charge of replacing the pillars.

Locals are preparing long before and everything starts after 16 enormous fir trees are picked and shot down in the woods. The procession also carries out some dangerous activities, such as transporting trunks over rivers or riding them while sliding down steep slopes.

Once the trunks reach the altar, the pillars are raised while the participants celebrate. It is indeed a memorable show, but it sometimes becomes terrifying.

According to Vintage news , the purpose of the Onbashira festival is to symbolically renew the four buildings of the altar, so 16 fir trees are used. Trees are considered “sacred posts” (“onbashira”) and hence the name of the festival.

The most dangerous festival in Japan lasts for several months and the main procession is made up of two parts: Yamadashi and Satobiki. The first takes place in April, the second in May.

Yamadashi means “going out of the mountain,” and within this part of the festival, the 16 fir trees, each up to 18 meters tall, are trained at a shinto ceremony.

Shinto, also known as kami-no-machi, is an archaic Japanese religion in which the ancestors and the spirits of nature are honored. Shinto believers are consciously dealing with all religious processions, and the Onbashira festival is no exception.

Everything is carefully prepared, establishing a connection between modern Japan and the ancient past of this Far Eastern country.

The most dangerous festival in Japan has made human victims 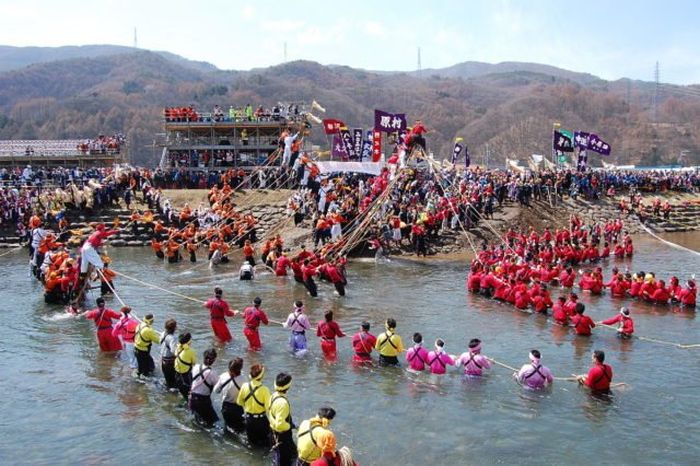 Therefore, for these trees are used special axes and barde made. Afterwards, the trunks are decorated in red and white, the two traditional colors of the shinto ceremonies. The ropes are attached to the trees so that they can be transported from the woods to the altars.

The trunk road passes over rough terrain and at some point it has to be lowered on steep slopes. Young people use this opportunity to show their courage and drive logs, sometimes reaching the 12-ton weight.

This part of the procession is called Kiotoshi, which translates as “the fall of the trees.” The second part of the most dangerous festival in Japan, a part known as Satobiki, is scheduled for a month later.

In a colorful parade, the trunks are transported to the altar buildings where they will be positioned. The four buildings are called Honmiya, Maemiya, Harumiya and Akimiya. 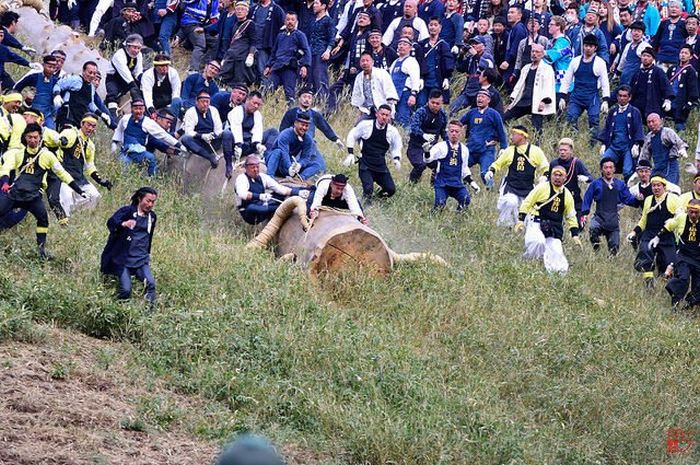 Four onbashira are raised at each of the buildings, a sacred pillar placed at each corner.Logs are raised with ropes and manually. Other groups of people sing and perform.

The whole festival ends with a closing event, called “Rid of Hoden”. But this event is not as famous as Yamadashi and Satobiki.

The Onbashira Festival has earned its reputation of being the most dangerous festival in Japan, because sometimes, during the processions, injuries and even deaths occur.

In 1994, two men drowned while trying to carry a log over the river. In 2010, two others died after falling from a 10-meter-high tree while it was raised at the Suwa Shrine. 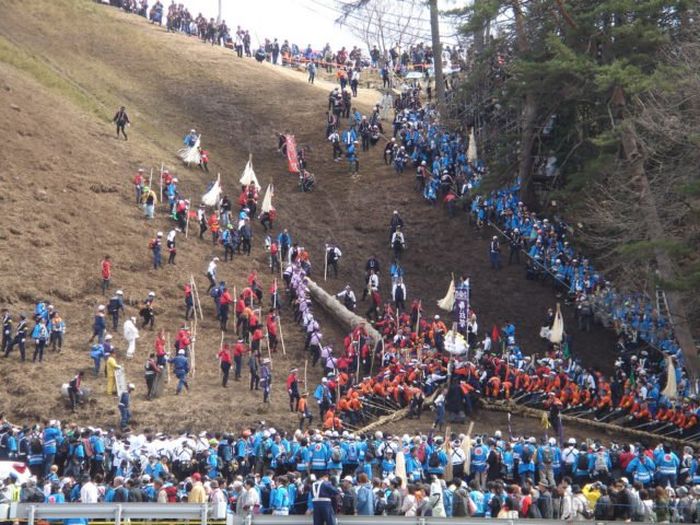 Still, two other people were injured. In 2016, a man died after falling from a tree that was raised to the altar.

But within each edition of Onbashira, celebrations gain in popularity, not only among locals, but among the rest of the Japanese and the world. Some less aggressive adaptations of this festivity are celebrated in the smaller communities in the Suwa region at the end of the summer.

Enthusiasts always look for the opportunity to take part in festivities and to be part of the teams that prepare pillars within these small-scale versions of the Onbashira festival. The most dangerous festival in Japan has gained popularity after being part of the opening ceremony of the Nagano Olympics in 1998.

5 incredible things people from the past did

5 of the strangest things on Earth